Billionaire hedge fund manager Chris Hohn has stepped up a campaign against the banking industry over its financing of fossil-fuel projects and criticised regulators for “allowing” systemic risk to build as a result.

Hohn, co-founder of The Children’s Investment Fund Foundation, wrote to the Bank of England, the European Central Bank, the European Banking Authority and the US Financial Stability Oversight Council this week to propose a series of reforms.

These include setting stricter capital requirements for carbon-intensive lending, and requiring banks to improve climate-related disclosures.

The activist hedge fund manager has previously demonstrated success through the “Say on Climate” campaign that has enlisted other investors and prompted dozens of companies to set out plans for dealing with their greenhouse-gas emissions and to allow investors to review them.

The financial sector is under increasing pressure from investors, activists and policymakers to develop decarbonisation plans and green their portfolios and services to address global warming.

Hohn said that banks were not producing credible plans, nor curbing carbon-intensive lending. At the same time, central banks were failing to police climate-related risks, he said. TCI does not hold any bank investments.

“Banks are unwilling to change their lending practices away from dirty companies” and central banks were “allowing systemic risk to build”, Hohn said. 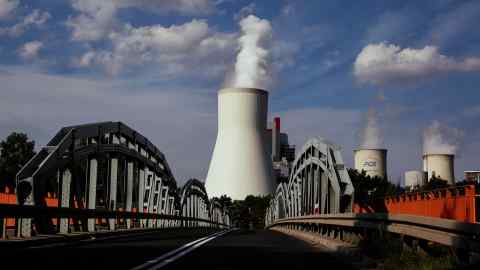 This has produced a series of calls from various business and policy advisory groups for co-ordinated government action.

This week the Glasgow Financial Alliance for Net Zero, a group of more than 295 financial services companies led by Mark Carney, former Bank of England governor, proposed an “overhaul” of the global financial regulatory system so that it could deliver net zero emissions.

Hohn said voluntary initiatives “are not working” and must be replaced with regulation. His proposals include a requirement for lenders to disclose the emissions associated with their loan books and underwriting businesses, and to produce five-year emissions reduction plans, since 2050 goals alone “are meaningless”.

Additional capital requirements should also be imposed for lending to fossil-fuel expansion projects, his letters to central banks and regulators said. The financial system would otherwise be “increasingly vulnerable. The financial sector cannot be left to manage its own role in the climate transition.”

Central bankers have been increasingly grappling with their role in tackling the risks posed by climate change. The BoE is running its inaugural climate “stress test”, while the Financial Stability Oversight Council is developing proposals for how to reduce climate-related financial risks.

Sarah Bloom Raskin, former US Treasury and Fed official, said regulators should outline how lenders were expected to manage and disclose climate-related risks in order to “minimise the chance that there will be these significant market devaluations that have the potential to create real instability”.

Last year, Hohn threatened to take legal action against HSBC, Barclays and Standard Chartered if they did not stop lending to coal mining companies. Since then, his charity group CIFF, said the three banks had promised to improve their coal policies.

Are you curious about the FT’s environmental sustainability commitments? Find out more about our science-based targets here